Texts > The Poeticizing I: Exploration and Reverie

A philosophical take on exploration and reverie - essay excerpts:

"Exploration can be misunderstood as solely meaning the action of crossing over a border to experience an ‘other’ side. However, this view is restrictive in that it confines the definition of a border as being an indivisible line, fixed in a permanent state as representing a universal truth while silencing other truths that do not fall neatly within its boundaries. Inspired by Fellini’s “spherical” perspective, we will examine an alternative reading of exploration—a fluid state of being defined not by boundaries, but by reveries. Exploration is a stepping into the realm of a border as it exists in reality—a porous, polyphonic, interpretive and fluid state of truth—as opposed to the crossing over a border that has fixed, definitive edges."

"In a state of exploration one experiences lived time and duration, letting go of the beats of measured time and their mirages of security and certainty. Exploring the borders where these rhythms clash requires taking a leap of faith, trusting that we can dwell in the discomfort of not doing the habitual thing. It takes courage to practice exploring a boundary, for in this state of exploration we unhook ourselves from our habitual beats of knowledge and survival, but in the process we become more responsive and less reactive, more open-hearted and less self-absorbed in survival mode, more alive and less stagnant. Freeing ourselves from the flypaper of definitive borders enables us to dwell in the ultimate spaciousness of positive groundlessness—experiencing lived time, and lived life.

In embracing the realm of real time, capitalism’s machinic rhythms loose their effect on the poeticizing I; their beats become points of différance instead of the baseline for dressage. In reverie, we become authors of our being-in-time. At a societal level, exploring the borders of objectified time exposes its traces, and one can hope that if we continue to explore them, the traces exposed might lead to a realization of Lefebvre’s vision, where capitalism’s rhythm of production and destruction loses its grip on humanity: “Perhaps ancient truths will come to pass through a language other than that of the modern, and the position in favour of the social."

Taking this step requires living as the poeticizing I, the one who dreams beyond the border as solid line and instead sees that it is porous, with opening where one can enter. The logical, cogito I would not do such a thing, for he is the one who hesitates in challenging a border, feeling protected behind its shield, but also silent and unable to move beyond its flypaper. “The world thinker is the being of hesitation,” Bachelard declares, while “the world dreamer does not know the division of his being”—he “inhabits the world which has just been offered to him." The poeticizing I does not get stuck on the borders of his being, he instead explores the fluidity of these borders and opens himself up to what flows through him. It is in this state of exploration that one is attuned to the polyphonic nature of borders: as Bachelard poetically states, when one is in a natural state of reverie and experiencing lived time, “the world is no longer mute." 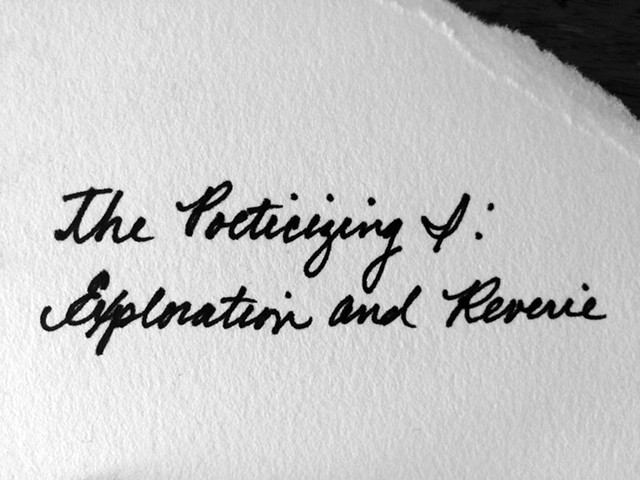