Texts > The Horror of Nothing to See: Rhythms and the Sublime

A counter-point to Kant's definitions of the sublime, grounded in the time-out-of-time experiences found in the intimate - essay excerpts:

"Woolf’s sublime is both a time out of time event and a state of being that resides within us. While Kant’s cognitive sublime is a delight in the negative, “a feeling of imagination by its own act depriving itself of its freedom” (Kant 99), Woolf’s sublime is positive: a feeling of pleasure in the freedom of the will from reason. Reason is an intellect that Nietzsche describes as producing “nothing but errors,” since its standards of “true” and “false,” of ones and zeros, are determined by an abstract, binary logic that is based more on familiarity and habit than the gray spectrum of the full human experience that includes doubts and unknowns (Nietzsche 169).

Can the feeling of a temporal sublime through the lens of Virginia Woolf guide us to a freedom of being, to experiencing the essence of life by accessing the gap between beats, beats by which we measure, define, and value our being, truth, and the world? In addition to Woolf, works by Henri Lefebvre and Luce Irigaray will support the possibility of this claim, and, furthermore, show us the profound potential for society when we unhook ourselves from these binary beats and access other truths of existence that dwell beyond them."

"In proximity and différance, subjectivity is released from the need to ground it in something, opening up possibilities of existence. Zero is something; it is not, not-one. The gaps between beats are not really gaps they are proximate beats, creating a new understanding of rhythm. In this unique rhythm of feminine discourse, a feminine subjectivity can reveal itself in its own essence. The feeling of the sublime, while still a time out of time experience of the immeasurable, unfolds differently in this proximate space; it moves between different beats, different modes of measurement, or from groundlessness to groundlessness. It is a sublime that is self-contained, unpunctuated, and horizontal. Experiencing it can guide one to the proximate rhythms of the feminine, and to discovering pure, self-touching, feminine pleasure."

"The proximate for Irigaray is not only nearness, it is “self-touching” (79). Her take on proximity as self-touching disrupts the dichotomy inherent in the language-thought system of reason in such a way that there is “no longer is a right side or wrong side of discourse” (80). In so doing, a space of différance is created for the feminine where the patriarchal logic of truth that demands the feminine be a negative, a lack, or a reversal, no longer controls the discourse. In this self-touching space of différance, the feminine can emerge as its own essence, and pure feminine pleasure can be experienced (86). ...It is a use of language that is beyond logic, a rhythm where silences are not empty."

"Virginia Woolf, Henri Lefebvre, and Luce Irigaray have shown us that the sublime can help us unhook ourselves from the beats of the rhythms that bind us, particularly the binary, military rhythm which leaves out other ways of existing and being. We move to these beats because we equate their familiarity with truth. However, our comfort in familiarity has produced a philosophy that has become so weighted in favor of reason and its patriarchal standards of “true” and “false,” that we have become disconnected with the spirit of our Being and disillusioned in its logic (Nietzsche 169). The letter “Z” does not encompass all knowledge and possess the meaning of life. The feminine is not the non-masculine. The housing market is not always safe and low risk. Experiencing a Woolfian sublime, an intimate, time out of time experience that occurs next to and in between the beats of life we measure ourselves by, can help us feel good about, and even take pleasure in, the unfamiliar, the unmeasured, and the unknown. It can help us to not be afraid of the something in the zeros, the silences, and the “nothing to see.” " 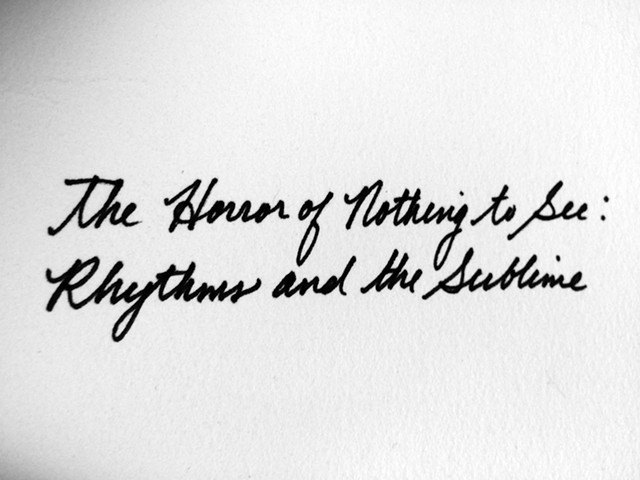